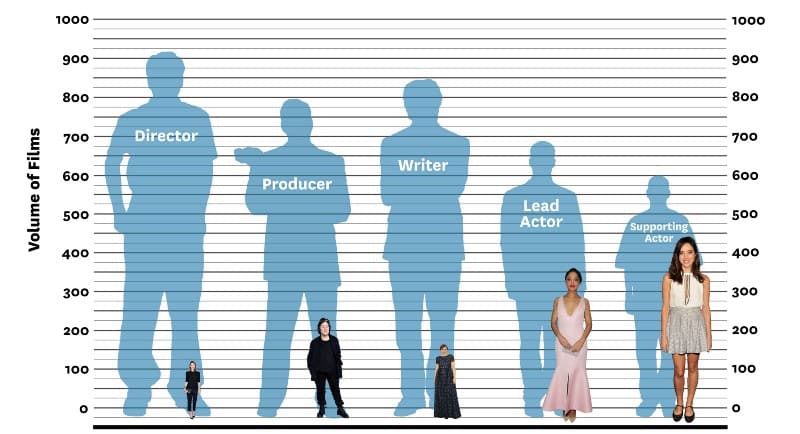 An eye-opening new infographic released today by SLATED illuminates cinema’s gender disparities in an unprecedented, data-driven light. The company’s analysis of 1,591 feature films released theatrically on at least one screen in the U.S.

between 2010–2015 exposes a systemic lack of trust on the part of the film industry when it comes to collaborating with women in the workplace. This bias is expressed not just in the lower production budgets that women routinely operate from but, even more crucially, in the number of movie screens on which films by women directors are shown. This lack of theatrical exposure is most startling with films budgeted at under $25 million: Male-directed films in that budget range are shown on three times as many screens on average as those directed by women (646 screens for men vs 242 for women). This imbalance has a direct, adverse effect on those films’ performance — as well as industry perception of female above-the-line talent.

Moreover, after scrutinizing box office performance, Slated’s data analysis quantifies in glaring numbers the extent to which women in all key filmmaking roles are both underutilized and undervalued by the film industry. The often superior investment returns that women professionals on both sides of the camera generate in the marketplace, as compared with their male counterparts, is simply not matched by the opportunities and resources that they are able to command.

Using data analysis and its own algorithmic scoring systems Slatedexamined everything from genre choices to script quality in trying to establish where the gender fault-lines might be. Neither of those showed any material difference between men and women. But where there is an alarming schism is in the number of movie screens that showcase films made by women, particularly for lower budget movies. That data point jumped out and prompted internal discussions at Slated as to how data science can best be harnessed to offset what is evidently a pattern of institutionalized bias at play in the marketplace. When one looks at the ROIs, it’s clear that women are outperforming men all over the place — so what can we do as an industry to make sure that the production volumes are more comparable?”

Among other findings that Slated’s new infographic has identified and visualized are:

Here’s the infographic in full:

This post is part of our filmonomics @ slated series which looks at film financing and project packaging through the lens of statistical analysis. We use hard numbers and our own scoring algorithms to re-examine some of the foundational thinking behind the movie business.

Slated — where great movies get made.
Projects, talent, film financing & distribution — sign up at welcome.slated.com